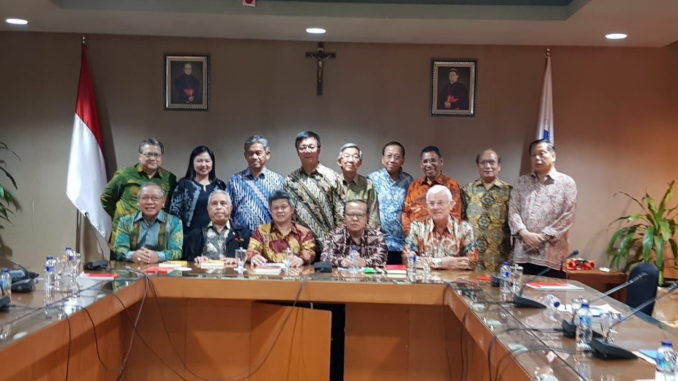 Agrofarm-The Bishops’ Conference of Indonesia (KWI) considered palm oil of having a big role in developing remote areas in Indonesia.

The statement was delivered by Jakarta Archbishop Mgr. Ignatius Suharyo in a discussion with the Indonesian Palm Oil Association (GAPKI). The discussion was held in Jakarta, Friday (24/8/2018). KWI was represented by 9 archbishops who came from various regions. This occasion was led by Samarinda Archbishop Mgr. Yustinus Harjosusanto.

As a strategic industry, said Mgr. Ignatius Suharyo, palm oil is proven to be able to improve people’s welfare and the development of remote areas in Indonesia. This must be built continuously so the people’s welfare can be lifted up equally in the whole region of Indonesia, said Suharyo in his official statement, Sunday (26/8/2018).

In the occasion, KWI hoped that in the management of oil palm plantations in Indonesia, the company could pay attention to various important issues, particularly regarding communal rights and worship facilities. Other things need to be paid attention to is the importance of environmental management of plantation.

At the closing of the discussion, Mgr. Ingatius Suharyo said, “We believe that the efforts are for the sake of God and the social welfare of people in Indonesia. Hopefully all of the efforts that have been done and the plans to improve the company’s performance really become a blessing for all of the people of Indonesia. May you serve people well.”

Meanwhile, Susanto said that his team truly appreciated a number of informations delivered by KWI about various issues spreading among the community on palm oil industry.

One of the suggestions provided by KWI is regarding the people’s complains about the low price of FFB. This lead to people being reluctant to manage their plantation, and caused people not having a fixed income.

“We will keep going tirelessly to do a number of improvements in this industry, so the price of FFB can be better and the people depending their lives on palm oil plantations can be prosperous,” he said. Bantolo

KORINDO pursues sustainable business and goes one step ahead in respecting all values on the earth.